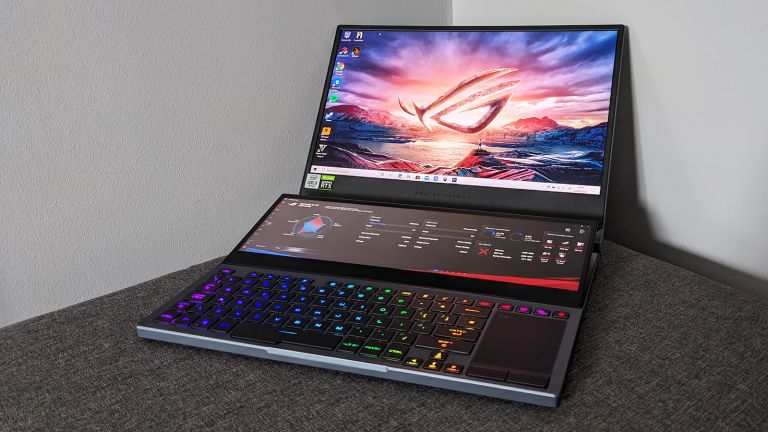 During Black Friday 2020, I managed to snap several deals on Amazon. The best deal was my ASUS ROG Zephyrus Duo 15, which doubles up as my graphic design and gaming laptop. It’s not the very best that money can buy, but I can’t complain considering the amount I got it for. To start, I... Read More

During Black Friday 2020, I managed to snap several deals on Amazon. The best deal was my ASUS ROG Zephyrus Duo 15, which doubles up as my graphic design and gaming laptop. It’s not the very best that money can buy, but I can’t complain considering the amount I got it for. To start, I really appreciate the fact that Asus kept their word. My purchase came with a one-month subscription to Game Pass. Initially, I wanted to go for a MacBook Air, but the price was higher, plus there were no worthy MacBook discounts. All the same, I don’t regret settling for the ASUS ROG Zephyrus Duo 15.

Well, there are several models in the series. The model I have is the GX550LWS-XS79, which is available on Amazon.

The Zephyrus Duo 15 boasts a state-of-the-art display that has been tweaked to suit creators and gamers. The 15.6-inch IPS panel allows me to play AAA titles at high speed. The refresh rate is also impressive when playing games requiring precision, such as first-person shooter and racing games. The 300Hz panel and 3ms GTG response time plus NVIDIA G-SYNC mode takes my gaming and content creation to a whole new level.

The Zephyrus GX550LWS-XS79 is not the best there is in the ASUS ROG Zephyrus Duo 15 series, but still, it packs a bunch. My Asus ROG Zephyrus Duo 15 comes with a 10th Gen Intel Core i7-10875H processor. It is matched by an NVIDIA GeForce RTX 2070 SUPER 8GB with ROG Boost.

With NVIDIA GeForce RTX 2070, I comfortably enjoy real-time ray tracing and realistic AI-enhanced graphics. On the other hand, the processor takes on heavy tasks such as photo editing, streaming, and 3D rendering. I’ve played Shadow of the Tomb Raider and Red Dead Redemption 2 at 1080p without any problems. The laptop also runs Adobe Illustrator and Adobe Photoshop seamlessly.

I am always on the computer, either running power-hungry games or heavy design software. But then, the ROG Zephyrus GX550LWS has never failed me. This is courtesy of the innovative ROG Intelligent Cooling thermal system that combines Active Aerodynamic System Plus (AAS) and Thermal Grizzly Liquid Metal Thermal Compound. Besides, Asus included the ROG Armoury Crate software, which optimizes cooling further.

The Zephyrus does not lack when it comes to memory and storage. The 32GB DDR4 RAM is overkill in gaming. On the other hand, the 2TB PCIe NVMe M.2 SSD is enough to hold all my games, including Red Dead Redemption 2 and Call of Duty: Modern Warfare, which clock in at 150GB and 175GB respectively. I must also mention that the load times are super fast, courtesy of SSD.

With a resilient magnesium-aluminide chassis, the Zephyrus is ultra-thin and ultraportable. It is 20.9mm thin and weighs just 2.4kgs. The aesthetics are also impressive for any occasion. I always feel at ease, whether at the office, at home relaxing, or catching up with work when having a coffee.

Other great features I like in the ASUS ROG Zephyrus Duo 15 include the ROG Aura Sync System with RGB Keyboard, USB Type-C with Thunderbolt 3 support, and a high-capacity 90Wh battery.

The ASUS ROG Zephyrus Duo 15 is a powerhouse when it comes to performance. It also has a display that befits pro-level gaming and content creation. With close to two months of daily use, I don’t regret buying the ASUS ROG Zephyrus Duo 15. My only concern is probably the power port’s location and the mouse pad on the right-hand side. But then, I’m getting used to it, so that’s no big issue at all.

This site uses Akismet to reduce spam. Learn how your comment data is processed.

Two friends met in a gym one day and found common ground in their shared goal – to become the fittest versions of themselves possible. Now, Davis and Jimmy have joined forces to write about what they’ve learned on their journey to the top of the mountain.